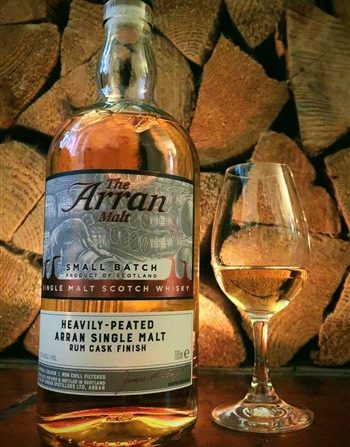 The following notes have kindly been uploaded by Jonathan Stephenson- @Jonnyraccoon1. You can follow Johnathan on Twitter, using the button at the bottom of this post.

Introduction to the whisk[e]y – This heavily peated dram was distilled by Isle of Arran Distillers at their Lochranza site. It was matured initially for 8 years in ex-bourbon casks then finished for (as far as I can tell) an unspecified amount of time in rum casks. It was released in 2019 and distributed via Isle of Arran’s new Lagg distillery site as part of a trio of heavily-peated Arran releases (alongside Machrie Moor Fingal’s Cut Sherry Cask Finish & Fingal’s Cut Quarter Cask Finish), in conjunction with Lagg’s first official distillation run after opening. Now available directly through Arran’s website.
Natural colour; no chill filtration. 57.2% abv. Tasted neat in a copita glass. One dram over two hours.

Appearance – Hay coloured. Viscous in the glass, lightly oily. No visible cloudiness until some water is added.

Nose – Fresh and inviting, fruity with a nice big wave of peat smoke. Can peat smoke be refreshing? Let’s say yes, the word fresh keeps popping up in my mind here. Behind the peat, the fruity sweetness in the nose is faintly herbaceous. It’s fresh in the way that mint is fresh, there are green notes here too, light woodiness.
Once the initial impact (all the fresh peaty freshness) is given time to open in the glass, we can get more specific with those sweet fruit notes: baked pears, a little mandarin orange, fried banana and some pineapple chips. Tropical ice lolly, cream soda, a little white grape.
Next comes some cinnamon. Clove oil. Burned hay, and an almost savoury grassiness. A little hint of tobacco in there somewhere. Something almost wicker-like. An unintrusive whisper of spent match. A little varnish.
This is a lovely, friendly, welcoming dram, especially for lovers of peat. I could sit for the next hour with just the nose.

Palate – Texture is medium-thick, creamy. A nice peppery spiciness on arrival with a woosh of dryly sweet peat smoke. The abv makes it’s presence known but doesn’t kick you in the mouth. Likewise the peat is impactful but not overwhelming, and leaves space for the fruity rum cask influence to assert itself properly. This is refreshing, almost fizzy. The baked pears are back, along with the fried banana, the pineapple chips, the bitterness of white grape skin. Possibly some red apple too.
There is brown sugar, soft cream soda, a little milk chocolate, a little mint, all with that consistent vein of dry earthy peat running along in the background.
There is a pleasantly savoury edge, adding some depth, like smokey honey-glazed ham.

Water: Still dryly sweet. The smoke is less punchy, the fruit comes forward a little and the peat impact is diminished. The creamy texture is retained, carrying the lighter notes nicely. Some might enjoy the softer side of this dram; the addition of water doesn’t take away from the complexity. But it doesn’t add anything either. All the same notes are still present, just as part of a softer profile. Ultimately, for my preferences neat is the way to go – keep the intensity.

Finish – A nice bitter smoked oak wood that lingers long, with the last remnants of those tropical fruits.

Overall thoughts – Conclusions: I first came across this release as part of one of my first digital tastings (with the lovely, knowledgeable and all-around charming folks of the Black Country Whisky Society). This was the closing dram of an already impressive and otherwise unpeated Arran line-up and I remember thinking it was my favourite of the night. I even wrote “buy a bottle” in my notes and underlined it. But when it came time, a couple of months later, to finally buy it, I wondered if the positive impression had merely been the result of the context. Was it good only in comparison to the rest of the drams? Was I just reaching the tipsy stage, 6 drams deep? Were my senses shot?

Thankfully, I needn’t have worried, this is an excellent dram. Makes me want to gather up a few more distillery releases like this from Arran – and it more than confirms my positive assessment of that digital tasting.

The word here is balanced. This whisky is finely tuned so that it manages to allow space for a large number of different notes to express themselves clearly, almost all at once. The relative youth of the whisky (between 8 and 9 years total) means that the peat is not so heavily impacted by the wood as to be tamed; but the bourbon/rum combination has still been given enough time to combine with the base spirit. The fruitiness and the peatiness are really well integrated and even make room for those lighter almost herbal notes too. If I can offer any criticism (and it might not really be a criticism for some), it would be regarding the fragility of this malt. I enjoy being able to explore with a bit of water but, instead of opening things up, water simply turns the volume down.

That tentative bit of negativity aside, this is another great release from Arran. In my opinion, worth the price they ask on their site for sure (presently £65). Complex, flavourful, moreish. Better put the bottle away…

Many thanks to Jonathan- @Jonnyraccoon1 (Twitter) for submitting his tasting notes. 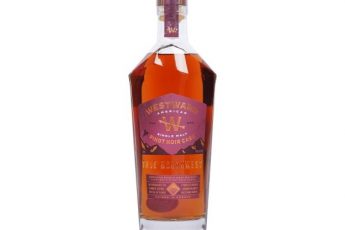 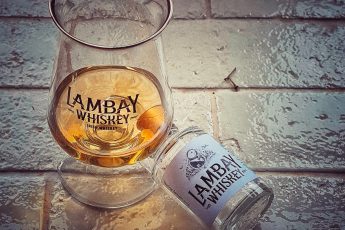