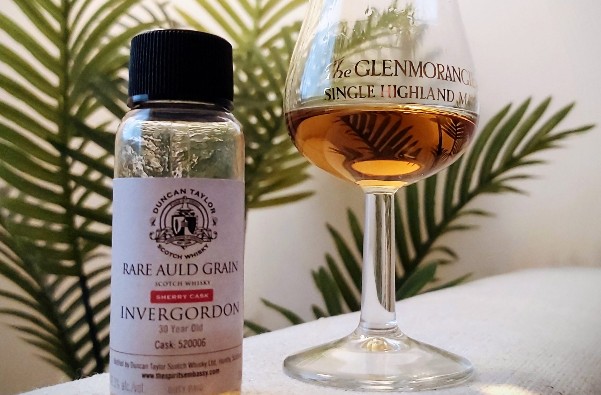 The following notes have kindly been uploaded by Jonathan Stephenson, @Jonnyraccoon1. You can follow Jonathan on Twitter, using the button at the bottom of this post.

Introduction to the whisk[e]y (casks used, distillery, is it a special release etc) – Matured 30 years in oak. This single grain whisky was distilled by Invergordon in January 1990 and was bottled and released by Duncan Taylor in January 2020 as part of their Rare Auld Grain series. Marketed as a sherry cask release, the final cask(s) used in the 30 year maturation will have been ex-sherry.
Natural colour; no chill filtration. Natural strength – 46.3%.

Nose – No abv kick at all. This is sweet and clear on the nose, and very gentle, with a 4backbone of darkly sweet raisin. Clean, tangy, rich with blackberry, plum and some spiced baked pear. Some light leafy notes, clean leather, candle wax. Old wooden furniture. A little nutty, possibly hazelnut? Milk chocolate. A little cinnamon and clove.

A dash of water brings out lemonade on the nose, some creaminess and a faint ashy note. This nose is gentle but it’s inviting, even tantalising; not eventful in itself, this is very much the trailer rather than the feature film.

Palate – Well now, here’s the event. The abv is mellow with cinnamon spice to begin, accompanying a nice creamy/buttery texture. There is significantly more depth in the taste than in the nose, starting with a big sherry-laden helping of raisin. There’s a huge amount of flavour but the delivery is so soft and measured. Beyond the big sherried raisin note, there’s plum, gently sour blackberry, faint leather, maybe varnished wicker. Cinnamon – those freshly made mini donuts dipped in cinnamon sugar, still warm. More hazelnut, and a dark, thick honey note. Candied orange peel. Toffee penny, a little hint of toffee apple even. Dark oak wood. And there’s a note right at the back I can’t quite articulate, lying somewhere between something vegetal and something I’d swear was a light wood char… – whatever it is, it rounds things out well, leading toward the finish.

A dash of water brings out a little more citrus. The delivery is even softer, allowing more woody notes to come forward along with a delicate but dark ashiness, slightly bitter. Even a little sweet almond. Subtlety is the name of the game here. Interesting and complex.

Finish – Medium, not nearly as long as I expected in fact. Sweet oak, spiced raisins, a bit of red fruit, charred berries. It’s all over, quite abruptly.

Overall thoughts – Well this is lovely stuff, if a bit of a roller coaster. And a raisin-roller coaster at that, there’s so much raisin all throughout. Spend a bit of time to let this one open up and there’s plenty going on in the mid palate behind that initial heavy start. There’s a good deal of complexity and subtlety, providing a wide range of well integrated flavours, delivered at a nice measured pace.
I’ve had quite limited experience with single grain whiskies (Teeling’s white wine finished single grain release is a lovely example of the category) but this Invergordon is a nice illustration of how successful single grain can be when given the right treatment.

However, it is not without it’s downsides. This dram carries you on a satisfying enough journey but for me there are as many downs as there are ups. The majority of the action is confined to the mid-palate; the nose is always very subtle and the finish, although pleasant, drops away rather unexpectedly.

This bottle is currently available at MoM for around £190 sterling ( https://www.masterofmalt.com/whiskies/invergordon/invergordon-30-year-old-1990-cask-520006-rare-auld-duncan-taylor-whisky/ ). Would I pay that price for a bottle? On the one hand, I’d say that it’s probably an objectively fair price for a 30 year investment. This is a well presented dram that unfolds slowly and provides a distinctive and enjoyable taste experience.

On the other hand, the drop-off in the finish is a little bit of a fizzle. When there’s so much rich, subtle deliciousness in the palate you can’t help but wish it would last a little longer, finish a little stronger. And while I appreciate the subtlety of this dram, the nose really doesn’t offer half of what’s in the taste.

Overall, I’d be happy enough to have more of this on my shelf, but honestly for my personal tastes there are more comprehensively impactful bottles of whisky that can be had for half the money. If your budget can easily accommodate it, I’d say it’s probably worth a go to experience a competent older single grain with a genuinely interesting flavour profile. For myself, it’s a no.

Many thanks to Johnathan, @Jonnyraccoon1 (Twitter) for submitting his tasting notes, as comprehensive and informative as usual. 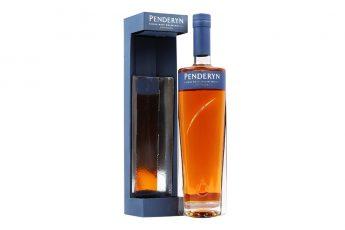 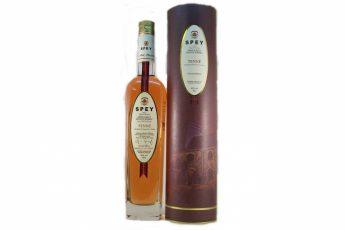