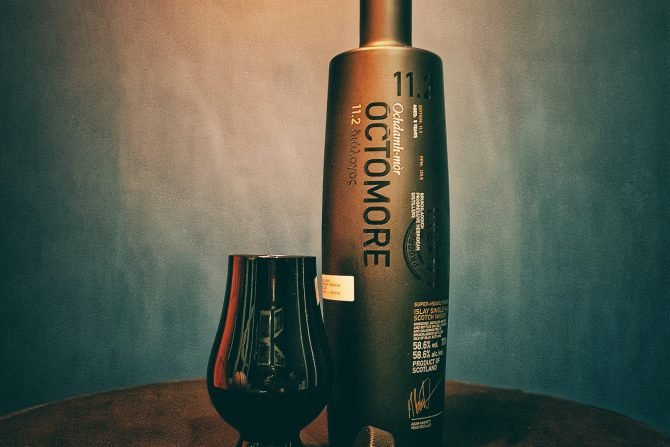 “Two parcels of alluring spirit were combined to create this Octomore 11.2. Distilled in the winter of 2014 from the 2013 harvest of 100% Scottish barley, our heavily peated Octomore spirit would take two different paths. Parcel One has spent 5 years full-term in ex-red wine casks from the Pauillac region of France. Parcel Two has spent 5 years in a combination of ex-American whiskey casks and ex-red wine casks from the St Julien region of France.
Bottled exclusively for the Laddie Shop, this edition is only available online.

Parcel One makes up 25% of the final composition. It was matured full term in ex-European oak casks, hailing from the Pauillac region of France. The winemaker is known to blend Cabernet Sauvignon, Merlot, Cabernet Franc and Petit Verdot varieties, and the casks therefore impart a strong influence on the final round and rich character of this 11.2 spirit.

Parcel Two makes up 75% of the final composition. It was first filled into ex-American oak before being transferred into casks from the St Julien region of France. It would mature in these exquisite ex-Cabernet Sauvignon wine barriques, known for their rich aromatic youthfulness, from May 2018 to January 2020. It would be married with Parcel One for the final months of its life.

Nose: Smouldering BBQ wood chips at first, I assume from the American oak, lots of rich meatiness too. Lurking medicinal aromas.
Rich forest (wild) fruits and berries, probably from the ex-Cabernet Sauvignon. Although heavily peated, there’s a nice balance with the sweetness.

I really like the nose on this, high hopes for the palate!

Palate: nice oily mouthfeel, then a fizziness on the tongue, as the smoke, fruits and spices hit. Wow, that’s a whisky that takes no prisoners!
The meat aromas follow through to the palate, BBQ sticky ribs in a glass.
The medicinal element is also still present, band-aid lingers into the finish. It’s been a while, but this tastes like what I had hoped Laphroaig PX Cask was going to be, but wasn’t, as the cask influence wasn’t nearly prominent enough. With this, it surely is.

Finish: Long, fizzy and numbing, this leaves the mouth tingling. The medicinal notes linger for some time, warming the chest and soul. The sweetness is also a nice lasting after taste. A lovely balanced warming finish, perfect for the upcoming colder evenings in front of a fire.

Overall: I was expecting a smoke bomb with any other element struggling to make itself known. I was hoping for a smoke bomb, with sweeter fruit and spice notes simply forming a backing group.
What I got was a beautifully balanced whisky. Yes, there’s lots of peat influence, but there’s also that wonderful balance and complexity, that surprised me at every sniff and sip.
It’s a lot of money for a 5-year-old whisky (£149) I admit, but I’d say it’s worth the price, almost. Bruichladdich has managed to squeeze so much flavour, complexity, colour and, dare I say, class, from the casks, in the relatively short period, that they’ve been a factor.
It’s not a starter whisky for sure, but I wouldn’t imagine anyone new to whisky choosing a bottle in this price range anyway.

I’ll be interested to see how this develops in the bottle over the coming weeks! 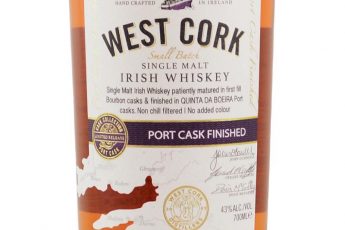 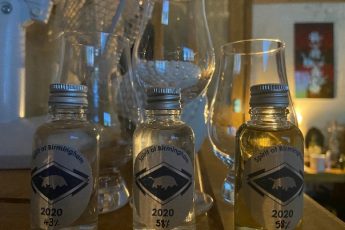