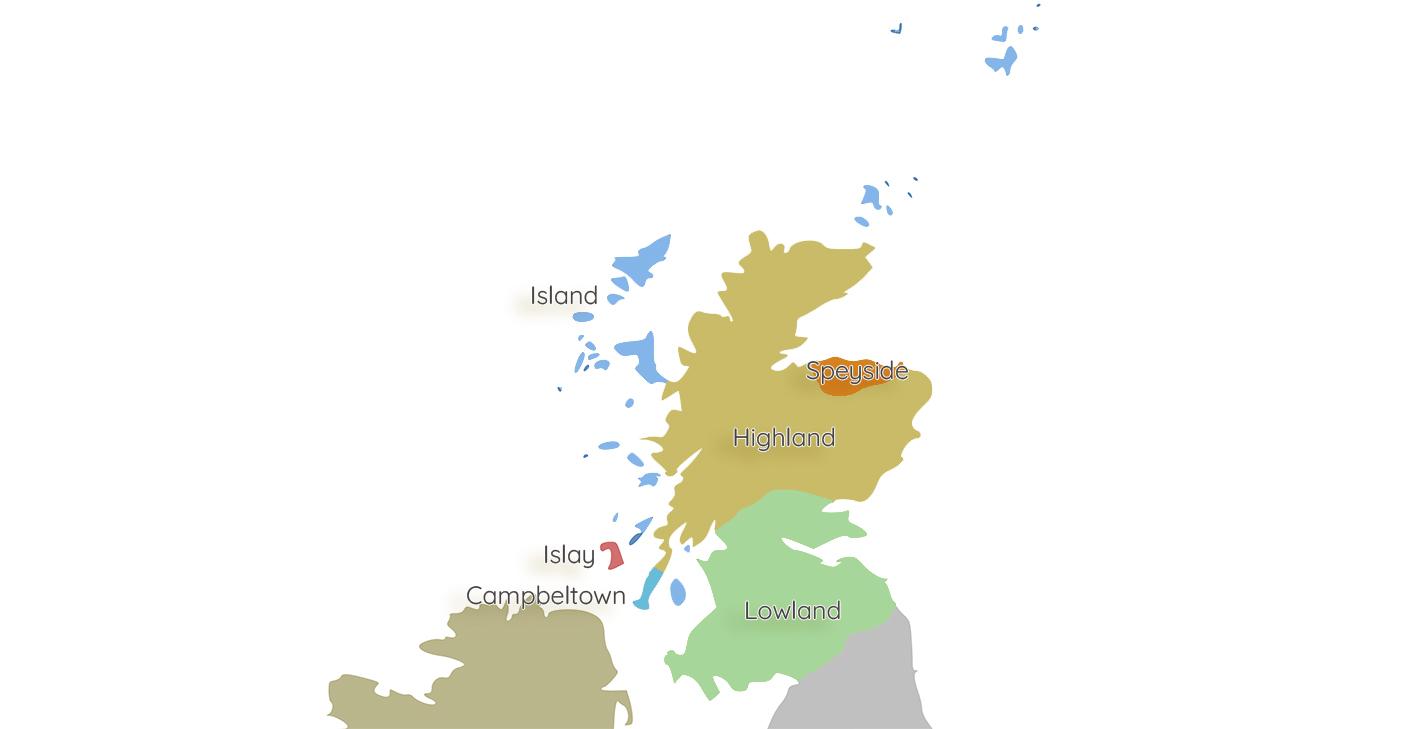 Scotland is well-known for its amazing whisky, with each region bringing something unique to the table. To really experience the best of this legendary spirit, you should be sure to take a virtual trip through Campbeltown, Speyside, the highlands, Islay, the lowlands or Islands of Scotland.
Each area is home to various distilleries that all have their special blends and varieties introducing wonderful aromas and flavours from their unique ingredients!
Whether it’s Campbeltown whisky from its western peninsula, Speyside from north-east Scotland, Islay from its southern islands, highlands whisky from further inland locations in central Scotland or lowlands whisky produced along Scotland’s east coast, each one brings a distinct flavour and character that has come to define the country’s reputed whisky production.
There are also several other whisky-producing islands such as Orkney and Jura

Because of its location, Campbeltown Whisky is recognised for its dryness and pungency. The region stands out from the mainland and is closer to the neighbouring islands of Arran and Islay than any other mainland producer.
Despite the fact that the region is small, the distilleries make extremely diverse whiskies: Springbank is powerful and heavily smokey, whereas Glen Scotia currently produces light, green whiskies.
Campbeltown distilleries are: Glen Scotia, Glengyle and Springbank.

The Highlands, which stretch from north of Glasgow to Thurso in the north, as well as the east and west areas excluding Speyside, are Scotland’s main whisky-producing region. Because of the huge territory, Highland whiskey is unique and offers a wide range of flavours, making it difficult to pin down a certain taste. The Highlands can be divided into four subregions: north, east, south, and west. Each subregion has its own distinct style.
Because of the Highlands’ size, these distilleries account for 25% of all Scottish Whisky production. When you factor in the neighbouring region of Speyside, the percentage jumps to 85 per cent.
Distilleries in the Highlands are: AnCnoc, Aberfeldy, Ardmore, Balblair, Ben Nevis, Blair Athol, Clynelish, Dalmore, Dalwhinnie, Deanston, Drumguish, Edradour, Glencadam, Glen Deveron, Glen Eden, Glendronach, Glenfoyle, Glen Garioch, Glengoyne, Glenmorangie, Singleton of Glen Ord, Glenturret, Knockdhu, Loch Lomond, Loch Morar, Macphail, McClelland, Millburn, Oban, Old Fettercairn, Old Pulteney, Royal Brackla, Royal Lochnagar and The Singleton.

An island in the Inner Hebrides, Scotland’s southernmost and most exposed islands, is home to medicinally smokey whiskies with a pronounced peat flavour profile. The distilleries on Islay’s south shore are more intense than those on the rest of the island.
On this island that measures only 25 by 15 miles (40 by 24 kilometres), there are nine active distilleries, and the industry is Islay’s second largest employer after agriculture. Every year in the last week of May, Islay hosts a “Festival of Malt and Music” known as Fèis le, with events and tastings celebrating the island’s cultural heritage.
Distilleries on Islay are: Ardbeg, Ardnahoe, Bowmore, Bruichladdich, Bunnahabhain, Caol Ila, Kilchoman, Lagavulin and Laphroaig.

The Lowlands is the second-largest whisky region in terms of area, but it currently has only five distilleries. The region extends from the south of Scotland to the north of Glasgow and Edinburgh. It meets the Highlands border; the line runs from the Clyde estuary in the west to the River Tay in the east, following the old county borders. In whisky terms, anything south of this point to the English border is known as the ‘Lowlands’.
These whiskies are known for their gentle, lighter notes with a citrus edge. Lowland whiskies are typically light and gentle, with no peatiness.
Lowlands distilleries are: Ailsa Bay, Annandale, Auchentoshan, Bladnoch, Bonnington Distillery, Borders, Chain Pier, Clydeside, Daftmill, Eden Mill, Jackton Distillery (East Kilbride), The Glasgow Distillery, Glenkinchie, Holyrood, Kingsbarns and Lindores Abbey.

Although Speyside is not officially recognised as a whisky region, it is widely seen as a section of the Highlands Region. Speyside is home to more than half of Scotland’s distilleries. Speyside malts are the sweetest of all Scotch Whisky Malts, and Speyside produces several of the most popular single malts.
Speyside is noted for its diverse selection of whiskies with distinct personalities, particularly sweet single malts with either very little or no peat. Because of its style, Speyside is a great place to start if you’re new to whisky.

Single malt Scotch whiskies produced on the islands off the coast of Scotland are known as island single malts. The islands (excluding Islay) are not recognised as a separate whisky-producing region in the Scotch Whisky Regulations but are considered part of the Highland region.
Arran, Jura, Mull, Orkney, and Skye are among the whisky-producing islands that make up this unofficial region. With a capacity of 2.6 litres, Talisker is currently Scotland’s largest island distillery.
The whiskies made in the Islands are extremely diverse and have few commonalities, yet they can be identified from whiskies produced in other places by having a smokier flavour with peaty overtones.
Scapa and Highland Park are two of Orkney’s whisky distilleries. Abhainn Dearg in Lewis & Harris. Talisker is found on Skye, Tobermory is found on Mull, and Jura and Arran are found on their own islands.